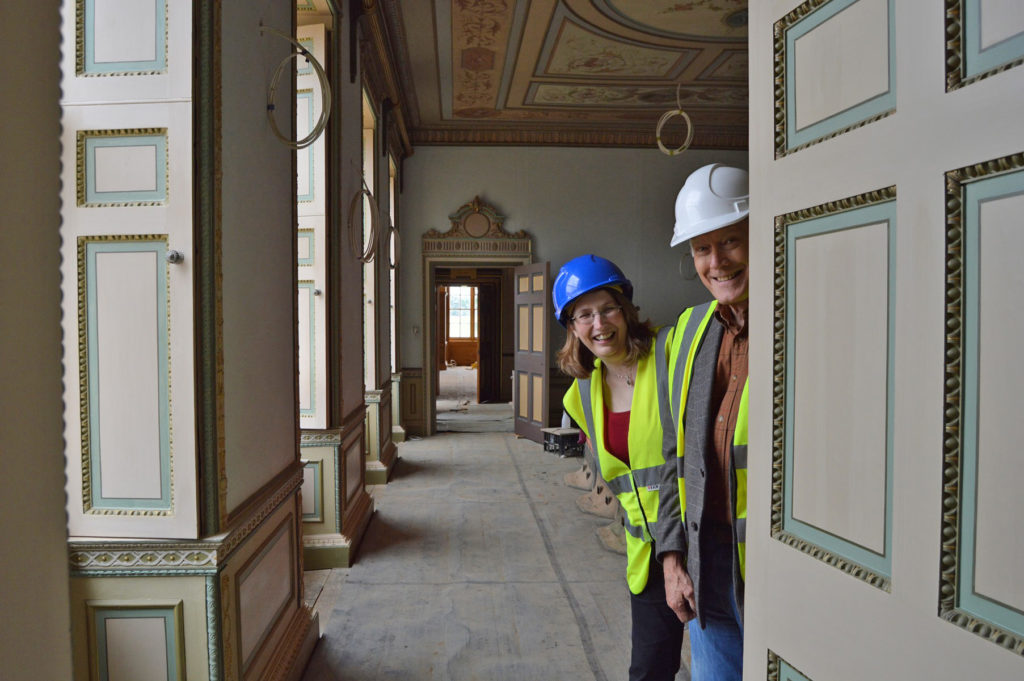 Woodhead Heritage are currently conserving  Northampton’s Delapre Abbey and it has revealed a wealth of beautiful architectural features.

Specialist subcontractor Hirst Conservation has been hard at work on this crucial part of the £6.3m, Heritage Lottery Fund-supported project to bring one of the town’s historic jewels back into use.

Once complete, the abbey – and the south range in particular – will host weddings and conferences, as well as welcoming tourists in their droves. The Heritage Lottery Fund (HLF) has contributed £3.65 million to the restoration, which is also being part-funded and overseen by Northampton Borough Council.

Cllr Tim Hadland, council cabinet member for regeneration, enterprise and planning, said: “This is a key part of the project and I’m stunned at how these rooms are shaping up.  “Each has its own unique character and, when combined as a venue, will rival anything currently on offer in the United Kingdom.  “Even though the work is not yet finished, it’s possible to get a real sense of how beautiful these spaces will eventually be.”

Five existing rooms on the south range are being restored – the library, salon, drawing room, dining room and billiard room – and these will be connected by a new conservatory.

Once Woodhead Heritage completes the restoration, the abbey will be handed over to Delapre Abbey Preservation Trust (DAPT) which will continue raising funds for further work.

Vikki Pearson, DAPT community engagement officer, said: “Watching the restoration of these spaces progress is incredibly exciting and the trust can’t wait to start to develop these spaces and dress them so that we can share Delapre’s many stories with our visitors.”

One of the most striking rooms is the drawing room, with its fresco ceiling depicting a variety of exotic and domestic animals, plus several members of the Bouverie family who once owned the abbey.

Jonathan Platt, head of HLF East Midlands, said: “I’m sure that everyone in Northampton will share our excitement at the unveiling of these impressive architectural features. It’s great to see the difference National Lottery players’ money is making and we look forward to the day this precious building is opened up to the public for the first time.”