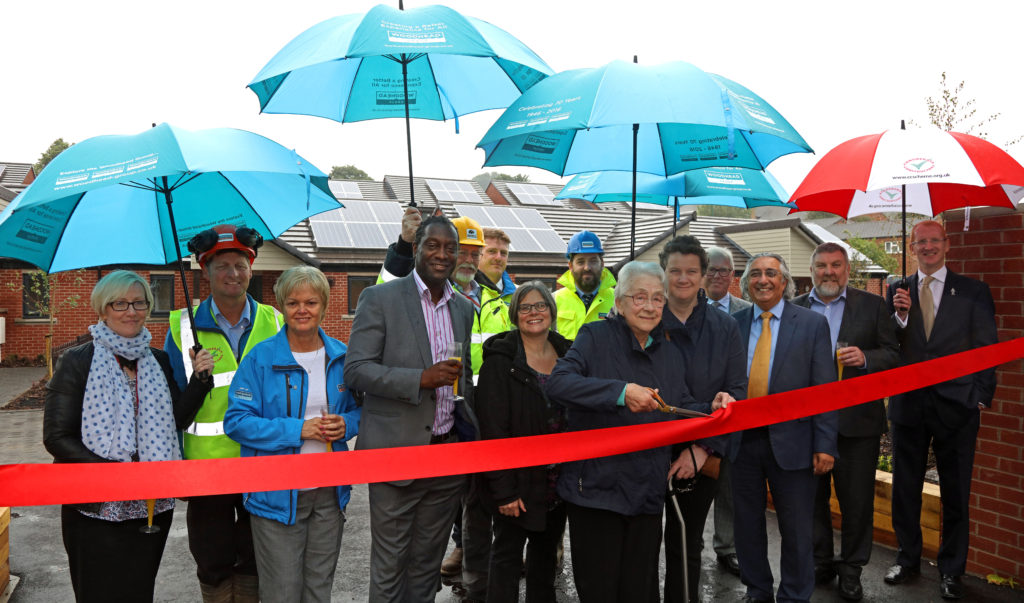 The Nottingham City Homes (NCH) and Nottingham City Council (NCC) development is the only social housing UltraSite scheme across the country, named by the Considerate Constructors Scheme (CCS). When completed, it will include 33 houses and six bungalows and is being built on the former Morley School site on the Wells Road in St Ann’s.

An Ultra Site is a status given to a construction site, which is expected to go well above and beyond the basic expectations of the Considerate Constructors Scheme. This means the project team will do even more to engage the local community, offer employment, training and work experience opportunities to local people, as well as providing exceptional facilities and support to the workforce on site.

The six bungalows, situated on a cul-de-sac on the frontage of the St Ann’s development, are now complete. They have been named Taylor Gardens after local community champion, Thomas Taylor, who passed away in 2004.

Mr Taylor lived in St Ann’s for most of his life and his wife, Christine Taylor, still lives there today, just around the corner from the development. Both Mr and Mrs Taylor have many connections with the area.

The development is being built on the former site of Morley School where Christine worked for many years. Thomas was the caretaker for the community centre, based adjacent to the site on the Wells Road. He did this throughout his working life as a bookbinder and guillotine cutter until he retired, which meant he was able to put more of his time in to his role at the community centre.

Christine and daughter Joanne, are still very much involved with the running of the centre.

Christine was thrilled when she heard part of the development would be named after her late husband. She said: “Thomas would have been very pleased, and humbled to have a road named after him, and Taylor Gardens will be a lovely reminder to us of all of his hard work and involvement.

“He was a very generous man who would do anything for anyone. He worked so hard for the centre and we wanted to make sure we carried on his work, which is why me and Joanne are still very much involved now.”

On Thursday 29 June, Chief Executive of the CCS Ed Hardy will visit the site to find out the progress being made on the CCS’ first social housing Ultra Site. He will meet the project team, local councillors and representatives of NCH, to discuss the impact such a development can have on the local community. A CCS registered UltraSite, operating with registered trade contractors and suppliers, can take considerate construction to an even higher level when it comes to caring for the community, the workforce and the environment.

“By working collaboratively, NCH, Robert Woodhead Ltd and the supply chain are clearly putting the local community, environment and workforce at the forefront of the development. The Scheme is delighted to see how their actions are positively impacting the local community, during the construction phase, and as a great long term legacy. This Ultra Site is a prime example of considerate construction at its very best, and is making a great contribution to improving the image of the construction industry.” 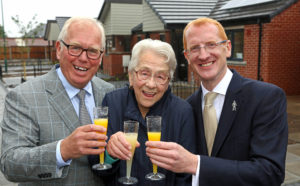 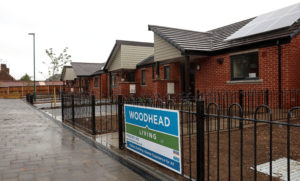 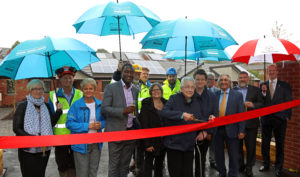 Nick Murphy, Chief Executive for Nottingham City Homes, said: “The new homes at Taylor Gardens are the latest to be completed in our Building a Better Nottingham programme, and provide much needed affordable housing for Nottingham people.

“Knowing how keen Woodhead Group is to consider the local communities around its building projects, and with us having close relationships with our tenants, naming this development Taylor Gardens seemed like a great way to show appreciation to a wonderful man and give his family an enduring memory of the tremendous impact he had in making his community a better place to live.”

Derek McGrath, Director for Robert Woodhead Ltd, said: “The environment, local community and the workforce are of upmost importance to us, and we are pleased to have been awarded an UltraSite status for the Morley site.

“We are also very pleased with Taylor Gardens being named after Mr Taylor as he and his family have clearly done a lot over the years; not only for the school that used to sit here, but for the community centre, which is still running next to the site. It seems like the perfect accolade to award such a hard working family.”

As part of NCH and NCC’s commitment to the local community, the project team is now working alongside Woodhead Living to give even more back. Thanks to funding from local ward councillors, NCH and NCC, the community centre next door to the site will be receiving a much needed renovation. The plans haven’t been finalised yet, but more details will emerge in the coming weeks.

The 33 homes which sit behind the bungalows are due to be completed by the end of this year.

Councillor Jane Urquhart, Portfolio Holder for Planning, Housing and Heritage at Nottingham City Council, said: “Our Build a Better Nottingham programme is transforming Nottingham’s neighbourhoods, by removing properties and regenerating sites which are no longer fit for purpose and replacing them with new, sustainable homes and creating communities where people want to live and work.

“Taylor Gardens is an excellent example of this, with a new development on the site of a former school which has earned special status for its consideration for the environment, workforce and the community. The naming of the road is one small aspect of this community focus and I’m delighted to see Mr Taylor honoured in this way, as the Taylors have been an important part in the local community for many years.”