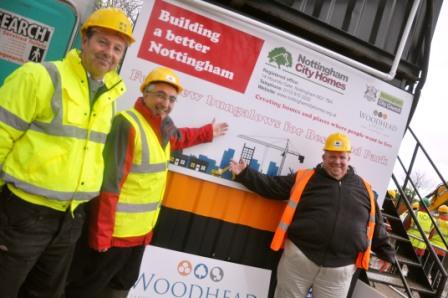 Robert Woodhead Ltd is looking ahead to Friday’s Committed to Construction in the East Midlands Awards, with nominations for five awards.

The ceremony, held on Friday 11th April at the Crowne Plaza in Nottingham, will be attended by the region’s top construction firms, suppliers and partners. The Committed to Construction Awards are held by the Chartered Institute of Builders (CIOB) each year to celebrate excellence in the industry. Based in Nottinghamshire, Robert Woodhead has been nominated in the following categories:

The firm has already been commended nationally by the Considerate Constructors Scheme for one of the sites at Henning Gardens in Top Valley, Nottingham and is also nominated in the Chartered Institute of Housing’s UK Housing Awards at the end of April for its work on the Geraldine Close site in Bestwood, Nottingham.

Pictured, from Left to Right: Site Manager of Robert Woodhead, Peter Winson. CEO of Nottingham City Homes, Nick Murphy and Cllr. Dave Liversidge at the start of the project in November 2012