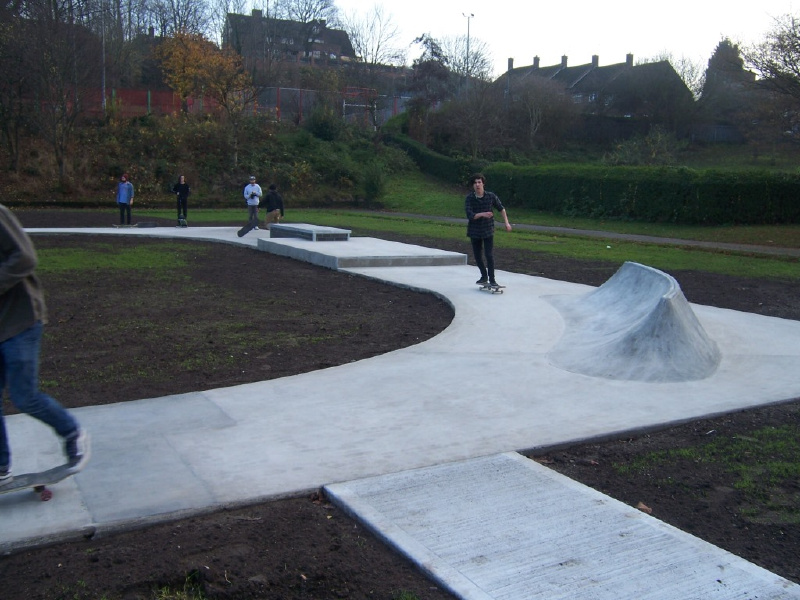 A brand new Nottingham skate plaza has been awarded a near perfect score by the national Considerate Constructors Scheme (CCS).

The new £80,000 facility on King Edward Park in St Ann’s was completed in early December 2016 for Nottingham City Council (NCC), thanks to WREN funding.

Site manager, Paul Cross, and his team of sub contractors were visited by a Considerate Constructors monitor in November, who commended them for delivering an ‘exemplary’ scheme.

The CCS Scheme awarded King Edward Skate Park 47 out of 50, which is Woodhead’s highest ever score. With a national average in November 2016 of 35.42, this score places the project in the top 1% in the country!

Throughout the project Woodhead has engaged widely with the local community, inviting the nearby Carlton Digby School to site, allowing students to learn more about the project. The team also visited the school with representatives from Skate Nottingham, who taught students some new skills and donated skateboards to be used in the future.

The site team, local residents and students from Carlton Digby School also collectively placed items of significance into a time capsule, which was buried under the skate plaza, commemorated with a plaque installed on the side of the structure.

Members of the local tenants and residents association were regular visitors to the site, and the Woodhead team has supported them in a range of local improvement works, such as installing remote control PIR lighting, painting the toilets in the community centre, donating topsoil and the site’s netting to the community garden and installing it securely. The team also converted their smoking shelter into a community noticeboard on leaving the site.

The Considerate Constructors Scheme measures a company on how they:

– Care about appearance (of the site)

Each area is marked out of ten, with top scores achieving an ‘innovative’ title. In two of the five areas – Respect the community and Value their workforce – King Edward Skate Park was highlighted as ‘innovate’ (10/10), with the remaining three sections marked as ‘exceptional’ (9/10).

The CCS monitor said following his visit: “An exceptional site across all five sections of the CCS code, and all concerned should be congratulated. The efforts that have been made on this site, given the value and duration, are exemplary…The workforce is very obviously valued with some exceptional practices being carried out on the site.”

Mark Maisey, Team Leader at Robert Woodhead Ltd, said: “We’re all delighted with this score. It’s the highest the company has ever achieved and a testament to the hard work and commitment of our site manager, Paul Cross, in managing not only a very efficient and well executed project, but a scheme that has been able to have a real impact on the local community.”

Last year Woodhead achieved a score of 45 out of 50 on another site for Nottingham City Council and Nottingham City Homes, at Denton Green in Broxtowe. This achievement subsequently resulted in a Gold Award at the annual CCS Awards, with the site being named Most Considerate Site  in the country (under £500k).

Cllr Dave Trimble, Portfolio Holder for Leisure and Culture at NCC, said: “The work that’s gone into creating this brand new community facility is fantastic, and I’m delighted to say it has already been used by a range of skateboarding enthusiasts.

“To go to such lengths to involve so many members of the local community in the construction of the skate plaza is to be commended. I hope it continues to be a popular facility for local people and look forward to hearing about Nottingham’s budding Olympic hopefuls, when skateboarding makes its first appearance at the Tokyo games in 2020.”

The council worked with East Midlands Property Alliance (empa) to appoint Woodhead, through its dedicated framework. Managed by Scape Group, empa aims to improve the delivery of construction projects and property maintenance for public sector bodies, saving them and the taxpayer money.

Ian Towlson, Regional Frameworks Manager for empa, said: “By engaging the local community through school visits and the time capsule scheme, Woodhead has delivered a project that will have a real and lasting impact on its end users, so it seems fitting that this has been recognised by the CCS Scheme.

“Thanks to the positive, collaborative efforts of Paul and his team, this scheme was also delivered two weeks ahead of the completion date. Overall this is an outstanding achievement of which Woodhead should be very proud.”