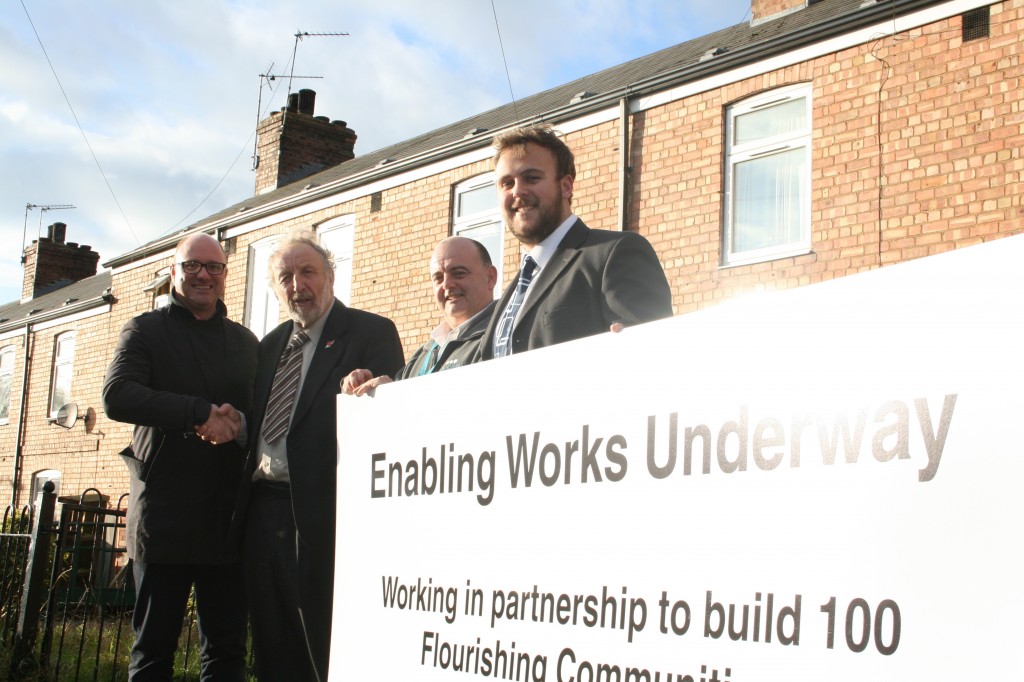 The revamp is the biggest such capital project in North Kesteven District Council’s history. The 80 year-old terraces are much in need of the programme of refurbishment, enlargement, restructuring and insulation, with the street set for reconfiguration too to make it more attractive and safer for residents.

Spanning two and half years, the entire scheme involves demolition of six of the 70 properties to make way for a further 18 new houses to be built at the rear, within the extensive gardens of the older homes As a first stage, contractor Woodhead has begun stripping away asbestos materials in some of the homes, ready for demolition to begin in January.

Because two of the six houses to come down are adjoining others, which are being retained and renovated, these will be taken down by hand, brick by brick, according to the council. The others will be coming out in a block to allow for road widening and provision of a play park.

This work will continue through to the Spring, by which time the main contractor will have been appointed and will be ready to start on the principle works, phased through to mid 2018.

Around half of the street’s residents have already moved out to allow the work to take place, with most intending to move back into their old houses after they have been upgraded. Residents were overwhelmingly supportive.

Tenant Pat Cross, who has lived there for 38 years, said: “Despite the stress and upheaval, we’re all really pleased with what’s going to be done. It’s 30-odd years since they were last given a thorough overhaul and they desperately need improving. We’re all on board, we feel like we’ve had an input and a say and reckon it’s going to be a real benefit to us all.”

Changes will vary across each house type but include ground floor extensions to create a dining area and open-aspect kitchen, study and additional WC/shower room, plus additional insulation and cladding to improve energy efficiency and appearance.

Executive Board councillor Stewart Ogden welcomed this step towards improving the lives of more than 200 people in the street, saying: “Tenants of Newfield Road have told us over a number of years how they wanted a range of improvements to their homes to make them easier and more comfortable to live in.

The enabling works have been procured through the East Midlands Property Alliance (empa) Framework.   The aim of empa, which was formed by local authorities in the East Midlands and is managed by Scape, is to improve the procurement and delivery of construction projects and property maintenance for public sector bodies saving time and money for them and in turn for council taxpayers.

“This major investment is typical of the council’s ongoing determination to ensure the ready availability of quality, affordable and comfortable housing for all.”